Fr. John Zuhlsdorf (Fr. Z) originally broke the story[1]. On the 100th anniversary of the original 1916 WWI Military issue rosary, during his address to the new recruits about to be sworn in, the Commander of Swiss Guard held up a “Gun Metal Combat Rosary[2]” during his address and told them that training and arms are necessary, but the most important and powerful weapon is the “Combat Rosary[3].” Here is a portion of his speech:

“The Combat Rosary. At the right time, at the beginning of the year, a generous donor has surprised us with a gift. He sent the Swiss guard the most powerful weapon that exists on the market: the “Combat Rosary”, Literally, the rosary for the fight. Now it was given in allocation to all the guards. It is important that we find the path of prayer, especially the prayer of the rosary. Our life, our works and our actions are in the hands of God. However, this does not mean that we can give up to arms and to exercises. God uses us as instruments to ward off evil in some situations. This is why we need a faith, faith in God and prayer ” (Col. Christoph Graf, Commander of the Swiss guard pontificate, oath of the new recruits, 6 May 2016).

At the prompting of my good friend, Fr. John Zuhlsdorf (Fr. Z), we mailed 150 Gun Metal Combat Rosaries[4] to the Swiss Guard, as a gift. We felt they have an especially important duty – protecting the Holy Father – so we wanted to them to be “spiritually armed.”

Here is the video. The Commander holds up and speaks about the Combat Rosary[5] at minute 20:37 …

While it is the Commander’s opinion that this particular rosary is “the most powerful weapon that exists on the market,” most would say all rosaries are equally powerful. Yet, why would the Commander say that? I’ll let you decide, after reading the story of the Combat Rosary …

The Story of the Combat Rosary

Men’s faith formation has been a pet project of mine for the last half of my 28 years as a priest. Like the Commander of the Swiss Guard, I‘ve wanted us men to rediscover the treasury of Catholic devotions. If men are going to be the spiritual leaders of their own domestic church, we simply must explore these time-tested and Church approved jewels of our Catholic life. Moreover, men need to “Stand in the Breach” and protect their families from every kind of evil infiltration.

As I poured myself into this endeavor, I was struck by how effeminate many of the sacramentals tended to be. It’s no wonder men are inclined to see these devotions as “what women do.” In particular, most of the rosaries looked like women’s jewelry or children’s toys. I began to scour the internet to find something truly masculine in a rosary. Sure, there were the classic black or brown bead rosaries, but they still seemed weak to me.

One day I happened upon a very intriguing rosary among some of the collectors’ websites. It was tough. It was strong. It had a kind of gravitas to it. This was truly a man’s rosary. As I read the description, it turned out I was looking at an original World War I military rosary. As described, it was commissioned and procured by, believe it or not, the U.S. government and issued by the military, upon request, to soldiers serving in World War I. Some of these rosaries were also seen in WWII. The solders usually referred to them as “Service Rosaries.” All of these rosaries were made in 1916. Awesome!!

After I purchased one of these original antique 1916 rosaries, I looked at this “masculine and muscular” military rosary, and said to myself, “The men need to have these!!” However, I wasn’t about to go around paying the high collectors’ price of the original military rosary. So, I began to develop a prototype for the bead portion of this new rosary for men, based on the original 1916 military rosary. A short time later, the prototype arrived from the “ball chain company,” in two pieces: The long fifty-bead section, and the short five-bead section to go from center medal to crucifix. It was amazing! It had a lustrous silver glow to it. It was weighty. It was manly!

Now, I was really fired up! I didn’t want to make a replica of the original. I wanted to respect the original that way. Instead, I wanted to make one based on the original, but well suited for us warriors – the Church Militant – to do full-on spiritual warfare. It was time to choose the most powerful medals and crucifix for this “assault weapon.”

For the crucifix, the Pardon Crucifix was a must. It is the only crucifix I know that gives indulgences for carrying it or kissing it. The word indulgence originally meant kindness or favor. In Latin it meant the remission of a tax or debt. Under Roman law it was used to express release from captivity or punishment. In this instance, an indulgence is given to remit the temporal punishment of sin that has been forgiven.

These indulgences have been declared upon the Pardon Crucifix by Pope St. Pius X in 1905, and have been approved in the pardon of the living and the souls in Purgatory in 1907.

The Front of the Crucifix: Above the cruciform figure, the familiar I.N.R.I. has been inscribed with the words “Jesus Nazarenus Rex Judaeorum. “” Latin uses I instead of the English J, and V instead of U (Iesvs Nazarenvs Rex Ivdaeorvm). The English translation is “Jesus of Nazareth, the King of the Jews.”

The Reverse of the Crucifix: On the transverse arms are the words, “Father, forgive them.” On the vertical beam of the Cross are the words, “Behold this heart which has so loved men.” An image of The Sacred Heart of Jesus is shown in the center.

In 1830, at the young age of 24, Zoe Laboure entered the Sisters of Charity and changed her name to Catherine. On July 18 of the same year, she saw a vision of the Blessed Virgin Mary, who came to her in the Chapel. Catherine and Mary supposedly spoke for more than two hours.

On November 27, 1830, Mary revisited Sister Catherine and presented a beautiful picture of herself. Catherine confessed this vision, which after investigation was deemed authentic by Catholic authorities.

Sister Catherine had one final vision of Mary, during which she received even more detailed descriptions about Mary’s miraculous medal. Sister Catherine saw Mary standing on top of a globe, shooting rays of light from her hands. Her feet were stamping on a serpent, the representation of Satan. Around the image was an inscription that described Mary’s sinlessness.

Two years after Sister Catherine first had these visions, the church minted and distributed medals throughout Paris. It soon became widely reported that the medal graced those who wore it with prosperity, health, and faith. Soon, people took to calling the medal ‘Miraculous.’ Today, hundreds of thousands of Catholics the world over wear Miraculous medals as testimonies of repentance, prayer, and faith.

There is indeed no medal that possesses such wonderful power and none so highly esteemed by the holy Church as the Medal of St. Benedict. Whosoever wears this medal with devotion, trusting to the life-giving power of the holy Cross and the merits of the holy Father St. Benedict, may expect the powerful protection of this great Patriarch in his spiritual and temporal needs. The medal is one of the oldest and most honored medals used by Catholics and due to the belief in its power against evil is also known as the “devil-chasing medal.” As early as the 11th century, it may have initially had the form of Saint Benedict’s cross, and was used by pope Leo IX. The reverse side of the medal carries the Vade retro satana (“Step back, Satan”) formula, which has been used by Catholics to ward off evil since the 15th century. Sometimes carried as part of the rosary, it is also found individually. In widespread use after its formal approval by Pope Benedict XIV in the 18th century, the medal is used by Catholics to ward off spiritual and physical dangers, especially those related to evil, poison, and temptation.

THE FRONT OF THE MEDAL

We see St. Benedict holding his Rule; next to him, on a pedestal, is the cup that once held poison, shattered after he made the Sign of the Cross over it. The other pedestal is topped by the raven, who is about to carry away the poisoned bread. In very small print above these pedestals are the words: Crux s. patris Benedicti (The Cross of our Holy Father Benedict).

Surrounding the entire face of the medal are the words: Eius in obitu nostro praesentia muniamur (May we at our death be fortified by his presence.)

THE BACK OF THE MEDAL

In the arms of the Cross are the initials C S S M L – N D S M D, which stand for the rhyme:

English:
The Holy Cross be my light;
Let not the dragon be my guide.
In the corners of the Cross are C S P D, which stand for the same words found on the front over the pedestals: Crux s. patris Benedicti (The Cross of our Holy Father Benedict).

Above the Cross is the word “Pax” (Peace), the Benedictine motto.

Surrounding the entire back of the medal are the initials to the words of the exorcism: V R S N S M V – S M Q L I V B, which stand for the rhyme:

English:
Begone, Satan,
Do not suggest to me thy vanities!
Evil are the things thou profferest,
Drink thou thy own poison! 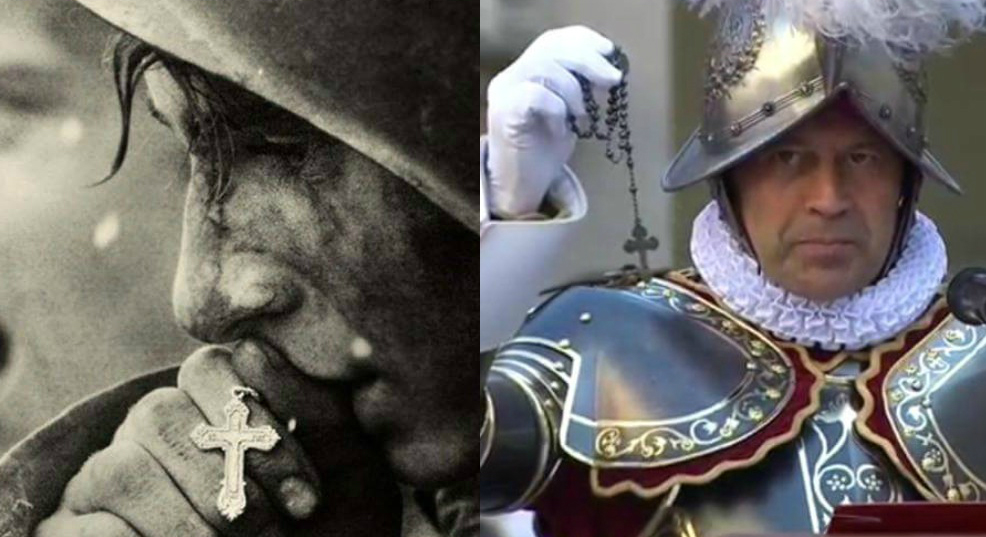