This is the date of the DNC Convention in Milwaukee, WI.

It is clear that liberals, progressives, Left or whatever they go by, have chosen to draw upon the power of evil, through …

It is also clear that, while we removed our supernatural armor (Belief in The Power of Grace) and dropped our supernatural weapons (Belief in Sacraments, Sacramentals, Devotions, THE ROSARY) every major institution has been captured by the radical secular left. The media, Hollywood, TV, universities, public schools, theater, the arts, literature — they relentlessly promote the false gods of sexual hedonism and radical individualism. Conservatives have ceded the culture to the enemy. Tens of millions of unborn babies have been slaughtered; illegitimacy rates have soared; divorce has skyrocketed; pornography is rampant; drug use has exploded; sexually transmitted diseases such as AIDS have killed millions; birth control is a way of life; sex outside of wedlock has become the norm; countless children have been permanently damaged — their innocence lost forever — because of the proliferation of broken homes; and sodomy and homosexuality are celebrated openly. America has become the new Babylon.

This is spiritual warfare, FULL STOP!!

This is why we are being called to use every supernatural weapon at our disposal to crush their demonic power.

And, this is why I am asking you to raise your armies, pack your supernatural weapons (I will bring a huge spiritual arsenal), and join forces as we must park ourselves outside the DNC Convention in, what will appear to be a peaceful protest, but will be the D-Day of Spiritual Warfare. 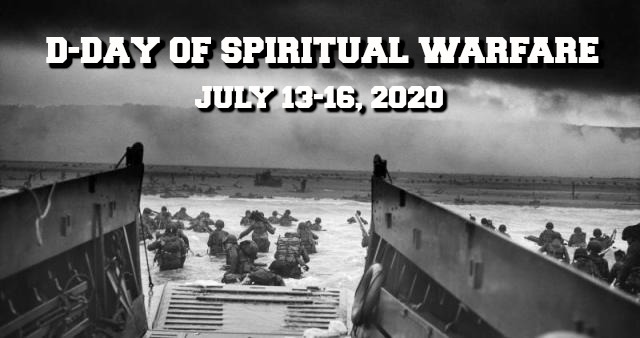