My Lord and Savior Jesus Christ,
At a word from You the devil and his minions flee in terror.
You are the source of all truth. You are the source of all strength.
By the power of your Cross and Resurrection, we beseech You, O Lord
To extend Your saving arm and to send Your holy angels
To defend us as we do battle with Satan and his demonic forces.
Exorcise, we pray, that which oppresses Your Bride, The Church,
So that within ourselves, our families, our parishes, our dioceses, and our nation
We may turn fully back to You in all fidelity and trust.
Lord, we know if You will it, it will be done.
Give us the perseverance for this mission, we pray.
Amen

Dear family, I’m not quite sure whether it was Fr. Heilman or Fr. Peckman who “assigned” the topics – but I am sure it was guided by the Holy Spirit! Consequently, I was blessed to have secularism among my topics. If you ever want to “push my buttons,” just bring it up! So we are clear on what button is getting pushed, the term “secularism” was first used by the British writer George Holyoake in 1851. He invented the term secularism to describe his views of promoting a social order separate from religion – like that ever would be a good idea – without actively dismissing or criticizing religious belief.

Obviously, given its date of creation, secularism, in word and in deed, was not a principle stated in the Constitution. For the record, what the Constitution does state in the Establishment Clause is, “Congress shall make no law respecting an establishment of religion, or prohibiting the free exercise thereof.” The unanimous understanding of this clause had to do solely with preventing the national government from creating – like Henry VIII – a religion enforceable through government police power. This truth is confirmed by the prohibition against prohibiting “the free exercise thereof.” Understand, dear family, that this applied only to the federal government, while states had the right to establish a particular religion. Few people know and understand that the Establishment Clause of the First Amendment, which clearly prohibits the creation of a national church, did not eliminate established churches in those states where they still existed. Indeed, it would have encountered opposition in those states if it had sought to do so.

Too many people spout off a definition of secularism as “the principle of the separation of church and state.” Typically, those same people – like the godless “Freedom from Religion” fascists in Madison, Wisconsin – twist those words around to make it something it is not. They embody the words of John Lennon’s song, “Imagine.” A doctoral dissertation could not cover all the many problems with that pagan paean, but let it suffice to say that when Lennon wrote “Imagine no possessions,” he was living in a multi-million-dollar mansion, and the music video finds him playing his ridiculously expensive white Steinway piano that George Michael bought at auction for over two million dollars. Lennon wrote that it’s easy if we try to imagine no religion, even as he lived in a time when godless communists slaughtered a hundred million of their own citizens.

As President Reagan put it so perfectly: “The Constitution was never meant to prevent people from praying; it’s declared purpose was to protect their freedom to pray.” Yet the “Freedom from Religion” crowd throw a tantrum over such things as taxpayers’ children praying in taxpayer funded schools. Leftists get away with throwing their tantrums because too many people do not know the Constitution nor its historical precedents. Dear family, just wrap your minds around the fact that taxpayers’ children praying in taxpayer funded schools was, in fact, Constitutional for roughly the first 175 years of our Country. Then realize that the ramifications of the rapid shift from this truth to the big lie of “Freedom from Religion” has resulted in the downfall of our culture and society. As a brilliant meme put it so well, “Bibles aren’t allowed in schools anymore but are encouraged in prisons. If kids were allowed to read it at school, they might not end up in prison.”

How do we sin regarding secularism? Simple. We sin every time we support, in word or deed, the big lie of “separation of church and state” according to the secularist model. We sin through any kind of voting for godless agendas. We also commit sins of omission when we fail to make a reasonable effort to be aware of, and fight against, these dark forces which are prevailing in our times. The many, versus the few, sin constantly in their ignorant and uninformed support – even cowardly support – for the godless left-wing agenda. This would include disregarding the unchanged and unchangeable truth regarding the five non-negotiables of Catholic morality, including abortion and same-sex unions.

What are we to do in a culture that literally assaults us (in words and in deeds) just for being Catholic and standing up for the unchanged and unchangeable truth? Firstly, recognize that we cannot be surprised by the hatred of the godless world. Jesus warned us: “If the world hates you, realize that it hated me first … If they persecuted me, they will also persecute you … And they will do all these things to you on account of my name, because they do not know the one who sent me” (John 15:18-21). No matter what hatred comes our way, we must stay attached to Jesus, who is the True Vine, lest we wither away. And we know what happens to those who choose to not stay attached to the vine: “Anyone who does not remain in me will be thrown out like a branch and wither; people will gather them and throw them into a fire and they will be burned” (John 15:6).

Dear family, buying into the big lie of secularism, and failure to intentionally let God’s grace and wisdom openly direct and guide our public life, is a grave sin. You don’t have to take my word for it. Jesus said, “Everyone who acknowledges me before others I will acknowledge before my heavenly Father. But whoever denies me before others, I will deny before my heavenly Father” (Matthew 10:32-33). We also know that standing up for our faith will alienate us from the godless because Jesus said that too: “Do you think that I have come to establish peace on the earth? No, I tell you, but rather division. From now on a household of five will be divided, three against two and two against three ….” (Luke 12:51-52).

Dear family, the left bludgeons anyone who brings faith into the public square, even priests, with the big lie of “separation of church and state.” But prior to Lyndon Johnson’s amendment and threat of taxation, faithful shepherds spoke up and spoke out against secular sin. Now, most everyone is a big coward, trembling in fear about being taxed. Please, dear family, honestly ask and answer two simple questions: Do we think the Father of Jesus Christ thinks it’s a good idea that we cower in a corner because of oppressive secularism? Do we think Our Father thinks we should not openly bring Him into the public square? The answers are obvious. So are the consequences for how we answer those questions.

My Lord and my God, we have allowed the temptation of the devil to move our hearts toward secularism. Countless times we have cowered to the prevailing leftist sentiment to imagine no religion, not just in public life, but even in private life. We are so immersed in temporal pleasures that we are blinded to our purpose in life, which is to know, love and serve God in this world so we can be with Him in the next. We intentionally justify leaving God out of our public lives because, after all, “freedom from religion” and their ilk have successfully inculcated us with the big lie of their false interpretation of the Constitution’s Establishment Clause and insistence upon “separation of church and state.” We fail to attribute the current chaos and anarchy of our times to the seeds of godlessness sown way back in the sixties when prayer was taken out of our taxpayer-funded schools. Ever since we have wittingly or unwittingly joined the side of the godless through our open or tacit acceptance of the big lie of secularism. We turn to You Lord, in our weakness, and beg Your forgiveness for our own secular attitudes – especially for our cowardice about speaking up and speaking out in the public square. We love You Lord, and we beg for the wisdom and strength to love You more. We know Lord, if You will it, it will be done. Trusting in You, we offer our prayer to You who live and reign forever and ever. Amen.

Lord God of heaven and earth, in Your power and goodness, You created all things. You set a path for us to walk on and a way to an eternal relationship. By the strength of Your arm and Word of Your mouth, cast from Your Holy Church every fearful deceit of the devil. Drive from us manifestations of the demonic that oppress us and beckon us to secularism. Still the lying tongue of the devil and his forces so that we may act freely and faithfully to Your will. Send Your holy angels to cast out all influence that the demonic entities in charge of secularism have planted in Your Church. Free us, our families, our parish, our diocese, and our country from all trickery and deceit perpetrated by the devil and his hellish legions. Trusting in Your goodness Lord, we know if You will it, it will be done, in unity with Your Son and the Holy Spirit, One God forever and ever. Amen.

Litany of the Most Precious Blood of Jesus

V. Thou hast redeemed us, O Lord, in Thy Blood.
R. And made us, for our God, a kingdom.

Let us pray:
Almighty and eternal God, Thou hast appointed Thine only-begotten Son the Redeemer of the world and willed to be appeased by his blood. Grant, we beg of Thee, that we may worthily adore this price of our salvation and through its power be safeguarded from the evils of the present life so that we may rejoice in its fruits forever in heaven. Through the same Christ our Lord. Amen.

__ Prayer for Freedom from the Devil
__ Daily reflection and prayers
__ Litany of the day
__ Pray a Rosary
__ Divine Mercy Chaplet
__ Spiritual or corporal work of mercy
__ Fast/abstain (according to level)
__ Exercise (according to level/ability)
__ Refrain from conventional media (only 1 hr. of social)
__ Examination of conscience (confession 1x this week)

To see the Goals, Methods and Levels of “Let Freedom Ring,” go HERE[1].

For those enlisted in the US Grace Force, you will receive, by way of email, the daily prayers and reflections for “Let Freedom Ring: A 40 Day Tactical Training for Freedom from the Devil.”[2] 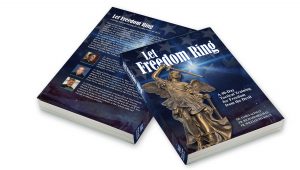 You can enlist in the United States Grace Force HERE[3] (please recruit family and friends!)

We highly recommend ordering the book (recently published), authored by Fr. Bill Peckman, Fr. James Altman and Fr. Rick Heilman. This amazing book will be a great tool for easy access, highlighting and bookmarking as you traverse through this 40-day challenge with tens of thousands of other special forces prayer warriors!

You can order the book at RomanCatholicGear.com[5]. 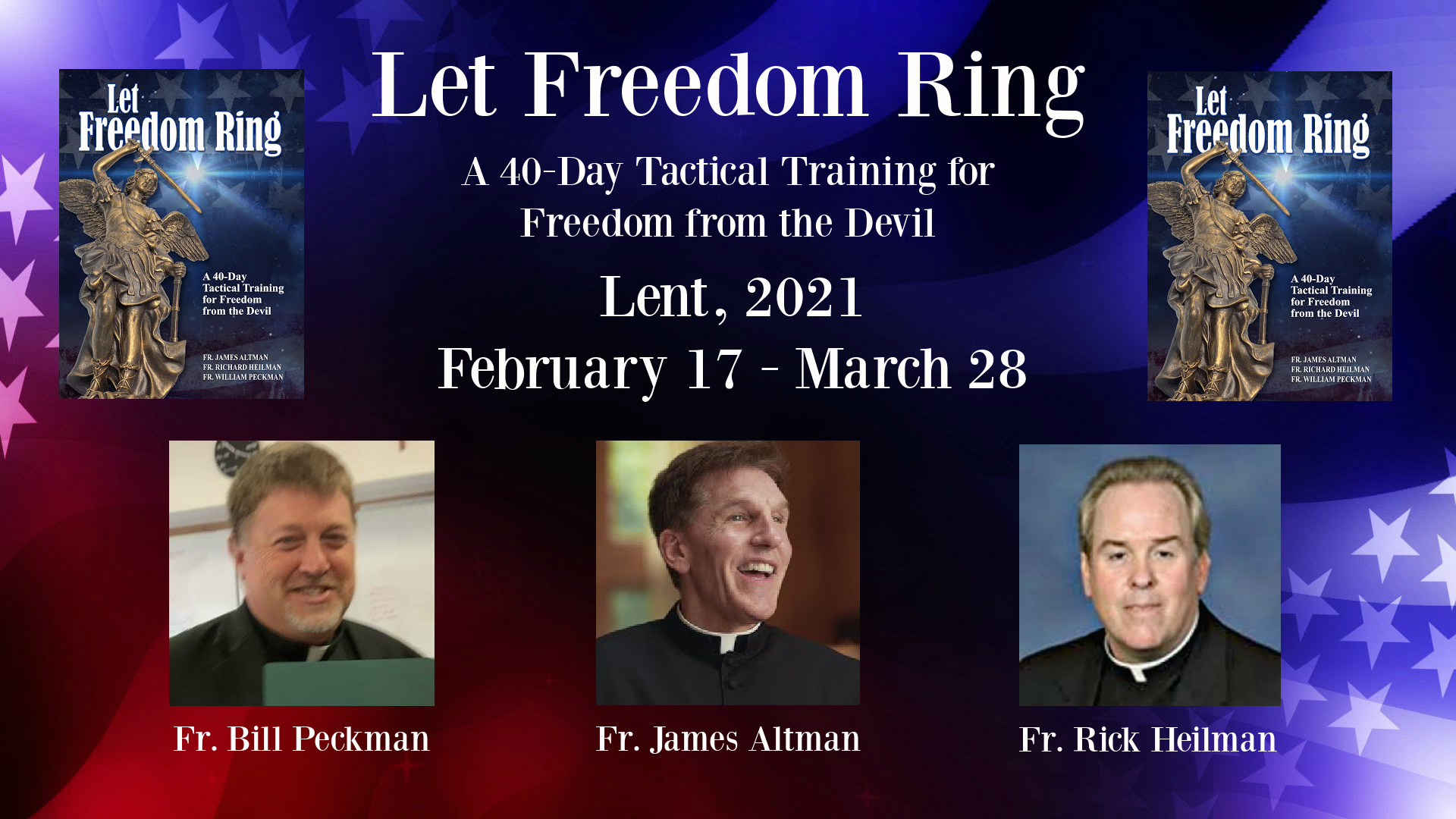