September 3 was the Feast of Pope St. Gregory the Great. Toward the beginning of his papacy, which began in the year 590, there was a terrible plague, and many died. Pope St. Gregory was inspired to organize a massive procession through the city of Rome. In the book, The Golden Legend: Readings on the Saints, author Jacobus de Voragine writes[1]:

“The plague was still ravaging Rome, and Gregory ordered the procession to continue to make the circuit of the city, the marchers chanting litanies. An image of the Blessed Mary ever Virgin was carried in the procession…

Then the pope saw an angel of the Lord standing atop the castle of Crescentius, wiping a bloody sword and sheathing it. Gregory understood that that put an end to the plague, as, indeed, happened. Thereafter the castle was called the Castle of the Holy Angel.”

A statue of St. Michael the Archangel, sheathing his sword, was put on the top of Castel Sant’Angelo, which remains a constant reminder of the mercy of God and how he responded to the prayers and supplications of the people.

Sept. 20 – Sept. 28:  Novena to St. Michael the Archangel (Prayers will be added to Novena for Our Nation)

Let us turn to St. Michael the Archangel in defeating the coronavirus pandemic!

On September 29, Feast of St. Michael, we will make an Act of Consecration to St. Michael the Archangel (This is also the date of the first Presidential debate)

Conclude with this Novena Prayer:

St. Michael the Archangel, we honor you as a powerful protector of the Church and guardian of our souls. Inspire us with your humility, courage and strength that we may reject sin and perfect our love for our Heavenly Father.

In your strength and humility, slay the evil and pride in our hearts so that nothing will keep us from God.

St. Michael the Archangel, pray that we may be blessed by God with the zeal to live our lives in accordance with Christ’s teachings.

St. Michael the Archangel, you are the prince of angels but in your humility,  you recognized that God is God and you are but His servant. Unlike Satan, you were not overcome with pride but were steadfast in humility. Pray that we will have this same humility.

It is in the spirit of that humility that we ask for your intercession for our petitions… (Petition: Protect our nation from unGodly liberals gaining power and control)

Saint Michael the Archangel, defend us in battle, be our protection against the wickedness and snares of the devil. May God rebuke him, we humbly pray; and do thou, O Prince of the Heavenly host, by the power of God, thrust into hell Satan and all the evil spirits who prowl about the world seeking the ruin of souls. Amen.

One of my favorite artists today is Tierra Jackson. Providentially, Tierra completed this rare rendition of Pope Gregory’s vision of St. Michael sheathing his sword just today! Just as we are about to call upon St. Michael!! This rendition is AMAZING!! 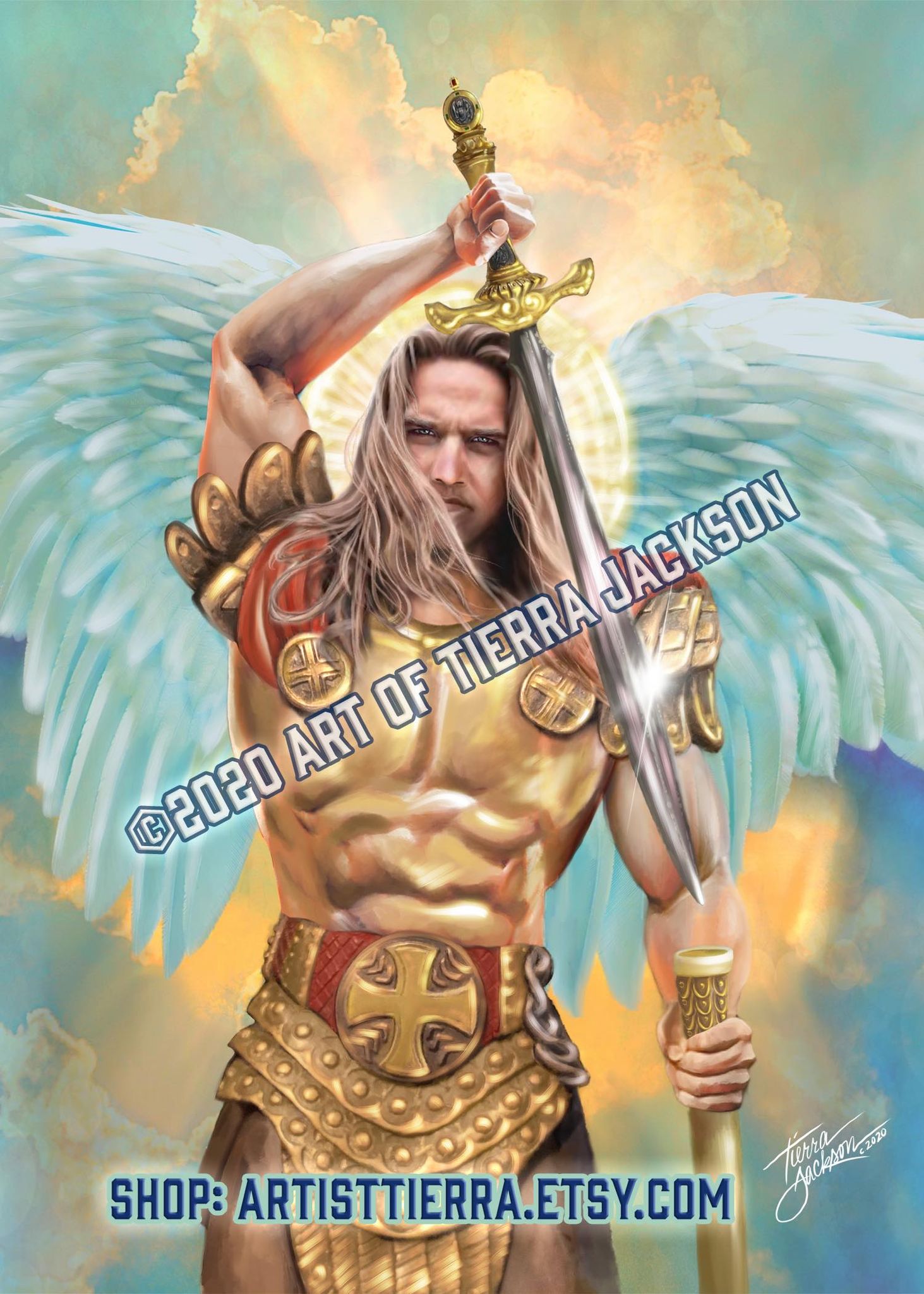 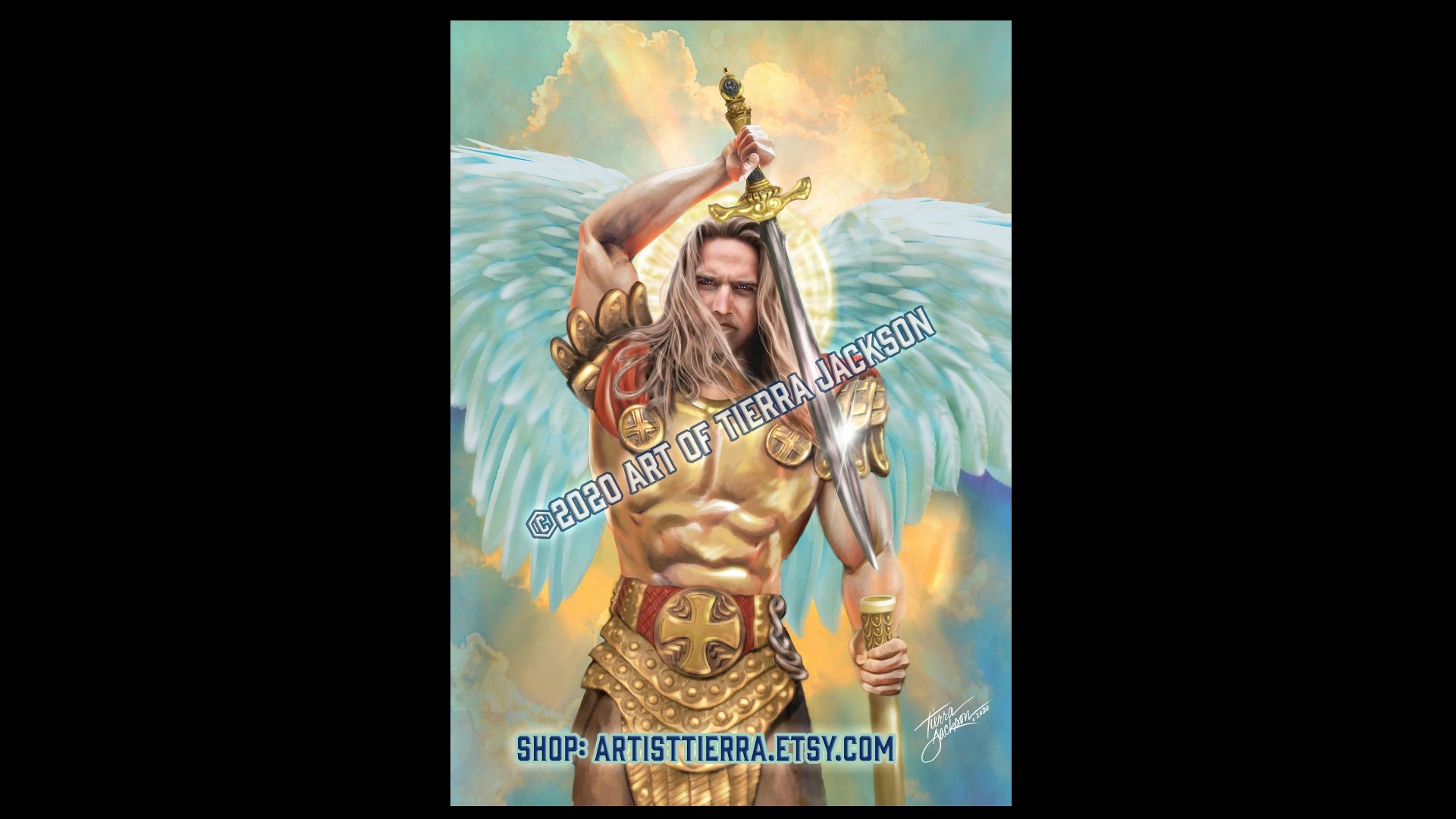