On the 450th Anniversary of the Battle of Lepanto, Cardinal Burke Calls for a Holy League!

October 7, 2021 marks the 450th Anniversary of the Battle of Lepanto, the formation of the Holy League and the origins of the Feast of Our Lady of the Rosary.

Pope St. Pius V formed the original Holy League in response to the dire situation in which Christian Europe found itself in 1571. Christianity was greatly divided and diminished at that time, and the enemies of the Church felt this was their time to “deal the last blow” to Christianity. This was when small bands of Catholic men and remnant armies from various nations came together under the spiritual leadership of the saintly pontiff and the military leadership of Don John of Austria. Pope St. Pius V dubbed them the “Holy League.”

By prayer (especially, Pope St. Pius V’s call for the world to pray the rosary) and fasting, they implored the help of God’s grace, through the intercession of the Mother of God, and, by the grace of Almighty God, on October 7, 1571, at the Battle of Lepanto, although greatly outnumbered, the Christian fleet won a crushing victory over the Ottoman Turks, saving Christendom and western civilization.

Pope St. Pius V knew this was not possible, if not for the intercession of Our Lady through the Rosary, and so he proclaimed October 7 to be the Feast of Our Lady of Victory, which was later named, Our Lady of the Rosary.

Cardinal Burke believes “this is exactly what is needed in our times.” His Eminence, enthusiastically, agreed to be the Spiritual Head of the Holy League, as he is hopeful this Holy League movement will spread across the planet.

As Cardinal Burke states, “At this particular moment in time, the Church finds itself in a similar situation to that of the Church in the late Sixteenth Century. However, instead of a physical enemy on the horizon, the Church and the family (the domestic Church) are threatened daily by materialism, relativism, secularism, impurity, and confusion regarding Church teaching.”

The battle today “is not against human forces but against the principalities and powers, the rulers of this world of darkness, the evil spirits in the heavens” (Ephesians 6: 10-12).

To combat the forces of evil in today’s society, the Holy League strives to call men back to the supernatural Divine Life in the state of grace and to transforming the culture through prayer and inspired action.

The time is NOW to gather the remnant forces, put on our battle armor (sanctifying grace), pick up our spiritual weapons (Eucharist, Rosary) and stand united and strong against the forces of evil devouring the faith of our loved ones!

The Holy League is headquartered at the Shrine of Our Lady of Guadalupe in La Crosse, WI.

The Holy League, in fidelity to its mission as a Roman Catholic solidarity movement:

The vision of the Holy League is to develop a network of parish based regular monthly Holy Hours with Adoration, Confession, an inspiring spiritual reflection, and fraternity for men.

The Holy League, in a Spirit of Marian Chivalry, under the patronage of Our Lady of Guadalupe and Saint Joseph, seeks to provide opportunities for the faithful to unite in prayer, especially monthly Eucharistic Holy Hours, for purification from sin and predisposition to Supernatural Grace for the fuller exercise of the threefold offices of Priest, Prophet, and King received at Baptism. The particular prayer of the Holy League is the monthly Eucharistic Holy Hour.

The Holy League is more of a “movement” than it is an “apostolate.” This means, it is not meant to compete with existing Catholic organizations or apostolates, but to be “incorporated” into these. Take, for example, the Knights of Columbus … The Holy League month holy hours are an amazing way for the Knights of Columbus to “incorporate” these monthly hours, as a spiritual development element for their KC members. The time is now to “unite the clan” … all the remnant forces … to become a supernaturally grace-filled “force to be reckoned with!!”

This was our first gathering for these powerful Holy Hours. Men from all over the diocese, joined together for Adoration, Confession, Inspiring Talk and a Fraternal Social. We have become strong spiritual brothers (most of these are, or have become, Knights of Columbus):

Where: We recommend picking a regional parish to host these Holy League gatherings. There is strength in numbers, so having these held “regionally” inspires men, as they see “many” other men responding to the call. This also facilitates greater availability of more priests to help with the Sacrament of Confession. You may start with one or two parishes per diocese. Or, possibly, one per vicariate (deanery).

When: We recommend holding these Holy League Holy Hours on First Friday evenings, as this gives the ability to incorporate devotion to the Sacred Heart of Jesus. Also, for most, this is a time when many do not have to arise for work the next morning. There is something special about evenings. We recommend taking Summer months off, so go from October (after school starts) to April (before Graduations, First Communions, etc.). This time period works well as it reaches men during Advent and Lent, when Catholics tend to be more engaged in their faith.

How (this is a sample evening):

6:00pm – Exposition of the Blessed Sacrament for Adoration, Confession is offered, Pray a Rosary

7:30pm – Benediction of the Blessed Sacrament

Is the Lord calling you to fight for your faith by establishing a Holy Hour at your parish or region? This monthly Holy Hour is a simple, but extremely powerful, way to invite other men into a deeper spiritual life. To break through to the Divine Life.

With permission from your pastor and some guidance from Holy League, your parish’s Eucharistic Holy Hour will bear incredible fruit for the men who participate and the entire parish. 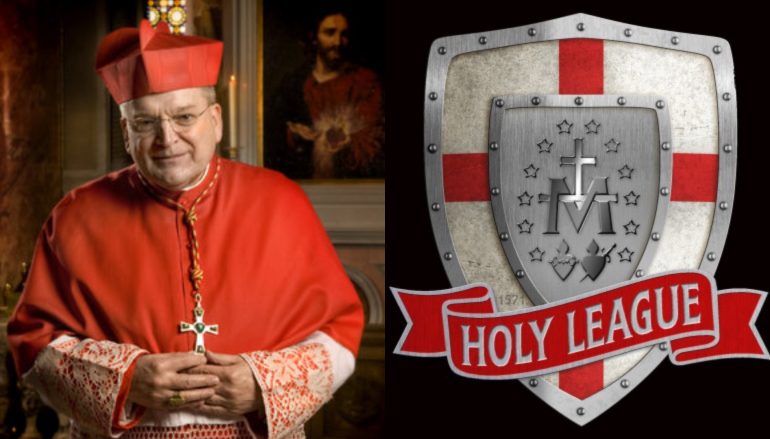