Let’s be honest. The extreme chaos and aggressive hostility in our culture are at historic proportions. Families are being torn apart. Employment and reputations are being placed in jeopardy, if one dares to hold conservative or, dare we say, biblical views.

I believe evil is very angry right now and is, therefore, aggressively struggling to retain, at all costs, the power it believes it is losing. By “evil,” I am referring to those forces that work in direct opposition to the will of God. Over time, under the cover of darkness, these satanic forces have managed to infiltrate the most influential levers of power in our culture. These influential forces of evil have come to be referred to as the “Swamp.”

“The swamp is the ruling class and it’s comprised of the elites on all sides of the political spectrum (This also applies to elements of the ruling class within the Church, e.g., McCarrick & company). Why has it always dominated despite repeated attempts by noble patriots over many years to try to chip away at its monstrous power? The short answer is that the swamp controls all the levers of power in this country (and in the Church), and they have the capability and the will to destroy anyone and anything that threatens its grip.”

Why is the ruling class (The Swamp) pushing for big government, or even socialism? Because this will give the ruling class even more power, as they enrich themselves. They have already captured every institution of influence: The media, Hollywood, TV, universities and public schools, and they are intent on indoctrinating as many as possible, and destroying anyone who gets in their way.

Our country has been in a cultural and spiritual free-fall, led by the ruling class … the elites of our day. Killing babies, redefining marriage, grown men in little girls’ bathrooms, etc., etc. … most of us are punch-drunk by one blow after another to all we have ever held as true and good and beautiful.

Having watched this swamp of evil and corruption emboldened – and aided by the “swamp media” – under the Obama administration, while radical Islamic terrorism was allowed to fester (recall that the response to terrorism from that administration was to threaten anyone who used the word Islamic), many understood that our country could no longer sit idly by and allow the swamp’s reign of destruction and corruption to continue.

But, stopping the swamp seemed impossible.

That’s when we recalled our Lord’s words, “With man this is impossible, but with God all things are possible” (Matthew 19:26). That’s when, in 2016 and the lead up to the Presidential election, we decided to put a call out to form an army of spiritual warriors to join together in this spiritual warfare to reclaim surrendered ground and turn our country around. We chose the mighty and miraculous 54 Day Rosary Novena as our strategic plan of action. We titled this spiritual warfare campaign, “Novena for Our Nation.” We had close to 30,000 souls respond to this call, and “The Swamp” – to the shock of the nation – lost that election … and They. Are. Furious!! And, they have spent the past three years using every dastardly trick they can find to regain power.

By 2018 (now dubbed, the United States Grace Force), our numbers swelled to nearly 45,000. And, we had people gathered in 1200 public sites around the nation, and over 50 nations participating, as we prayed the Glorious Mysteries and received the Marian Consecration in unison (3:00pm CST) on October 7, 2018. Just as we were beginning our 54 Day Rosary Novena, the news broke about the Pennsylvania Grand Jury Report, that exposed extensive sexual abuse in the Church. This then led to several other exposés throughout the country, including a bright light shone on former Cardinal McCarrick. Now, the “Swamp” was being drained in the Catholic Church.

As our 54 Day Rosary Novena approached in 2019, the Spiritual Battle intensified, with the forces of evil becoming even more extreme in their advocacy of unrestricted abortion (even after birth), euthanasia, and a radical rebellion against God’s creation of man, woman and the sanctity of marriage and family; accompanied by open hostility against all who do not share their unholy beliefs. Even our Catholic Church seemed to grow in turmoil, dealing with deep divisions, especially as the Amazon Synod approaches.

It is in this environment that a Call to Spiritual Arms is being issued again and with even greater urgency to prayer warriors across the country and the world.

The United States Grace Force enlistment has now swelled to over 57,000! We have a very powerful spiritual warfare campaign in place as we head into October and, among many other things, the Amazon Synod. See the “Battle Plan” HERE[2].

Whether we want to admit it or not, our battle is against Satan, yes, but he has been most effective and powerful through the radical secular ruling class – THE SWAMP.

On this Feast of St. Michael the Archangel, I am requesting the 57,000+ in the United States Grace Force, and anyone else who chooses to participate, to add a very small but extremely powerful prayer at the end of your daily rosary …

Please prayer the St. Michael Prayer, with the intention that St. Michael and all the choirs of angels join us in battle to DRAIN THE SWAMP in our country and in our Church.

SIGN-UP TO BE A GRACE FORCE PRAYER WARRIOR HERE: 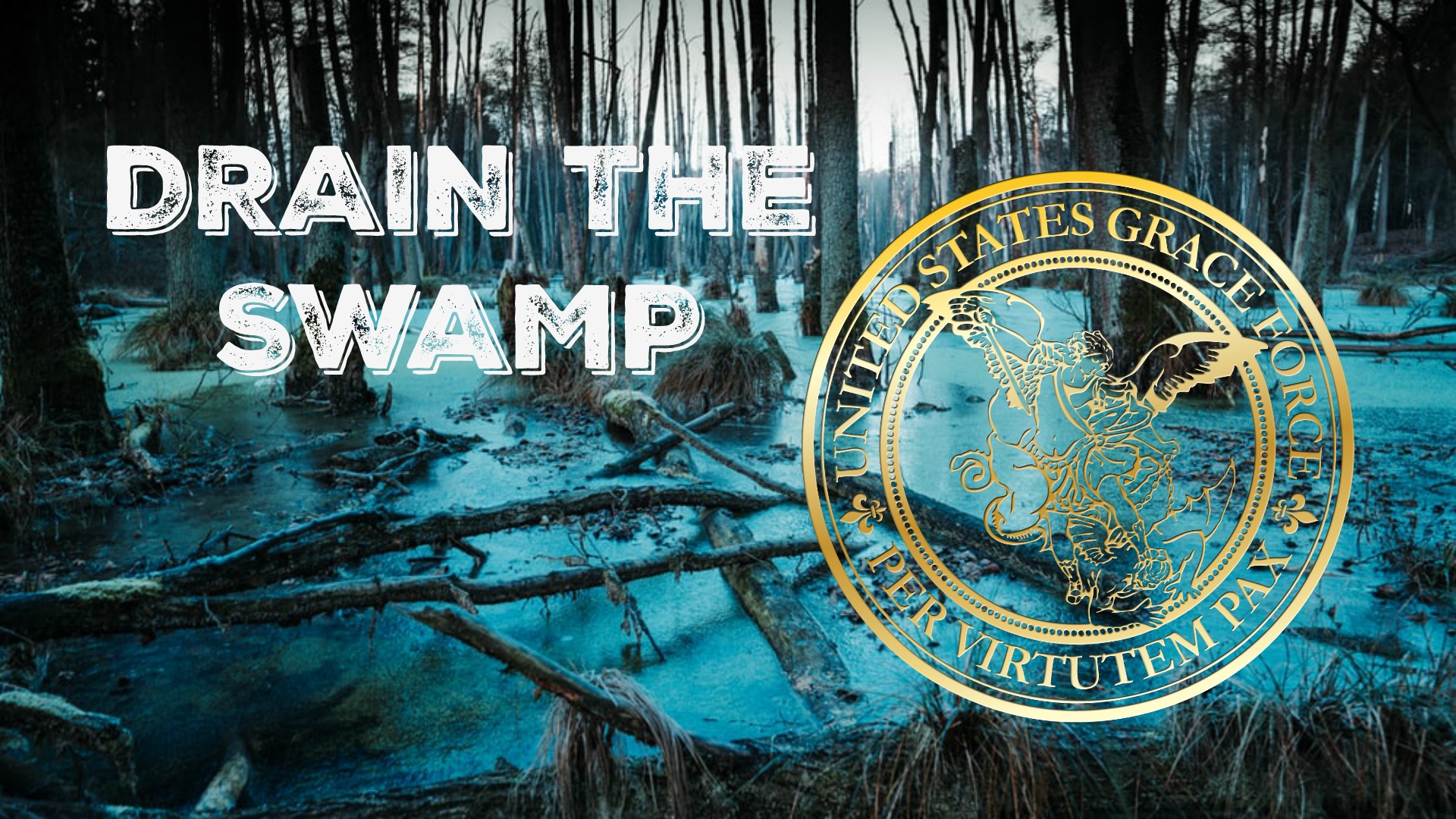