The Demonic Left is Throwing Everything But the Kitchen Sink at Us – STAY STRONG!

This time, my Facebook account was suspended because I shared a “Newsweek” article … an article that is still seen on “Newsweek’s” Facebook page (See HERE[2]) … an article I had shared almost 3 weeks prior.

One month ago, Facebook had suspended my account for 24 hours for sharing a Youtube video of a reputable doctor who has had success with a treatment for Covid-19. The video that, supposedly, does not follow Facebook’s community standards, had 1.5 million views in one week, and is still not banned on Youtube.

And, one month prior to that, on May 10, I received my first “warning” for going against community standards for sharing a piece of history … that, apparently, Facebook, along with the demonic Left, wants to erase. I shared a quote (see below) by the infamous Joseph Goebbels, who was one of Hitler’s top propagandists. I had been warning all along that our times resemble, in many ways, the propaganda (“message control”) of 1930s Germany. But, apparently, the “Mob” does not want us to make such connections.

I wrote this in an article one month ago, “I’m told, a third infraction will suspend my FB account for 3 days. ‘So, I better not …’.  So, I better not WHAT?  What ‘fake excuse’ for penalizing me will come next?!”

Well, here we are … a third infraction for sharing a “Newsweek” article[3].

It is more than interesting that my so-called “offenses” occurred almost exactly one month apart. 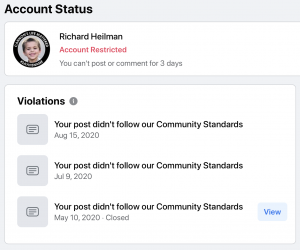 This means Facebook is, clearly, setting me up for a one week suspension in September, and a one month suspension in October … the month leading up to the election.

This. Is. Spiritual. Warfare!

YES, I am a threat to the demonic Left. Mainly because I am unafraid to call them “demonic.” Why do I use such a term? Because this “movement,” propped up by such entities as witches and satanists, called “progressivism,” is in direct revolt against God. These are NOT your “JFK Democrats.”

In fact, God, and His adherents, are a threat to the agenda of the “progressives/evolved.” These notions must be destroyed, according to the “progressives/evolved” … Notions such as seeing faith as a positive influence in the culture; revering and protecting the child in the womb; supporting the bedrock of civilization – the nuclear family; seeking care, housing and assistance for those dealing with psychological disorders and addictions … many of which are abandoned on the streets (e.g., drug addicts, homosexuals, gender dysphoria, etc.); banning the slavery of prostitution and child sex-trafficking; supporting a healthy economy to assist people off of government dependence (votes for “progressives”) and giving them the dignity of work; healing instead of stoking racial division (again, for votes); seeking quality education – not leftist indoctrination – for our children (over kowtowing to unions who fill politicians’ coffers); having a patriotic heart for our country (Yes, we “stand” with our hand over our heart, as we sing the National Anthem, in thanksgiving for “heroes” who laid their lives down for our freedoms); honoring and thanking the heroic lives of police, military, first responders, and all those who put themselves in harms way to protect us and our freedoms (instead of efforts to defund and demoralize them).

In today’s culture, if you hold these truths to be self-evident (to borrow a phrase) – notions that find their source in our faith in God – YOU are the problem! YOU are causing division. And YOU must be silenced or even assaulted. In other words, the so-called progressives/evolved have granted to themselves the right to dictate to everyone else what is right and wrong. They are the arbiters of what is considered the “new normal” of values. They have made themselves “gods.”

Notice, during the demonic Left’s convention, they are telling our President, and all of us, that “WE” are causing division. If only we “comply” to their evil agenda, we will find unity once again. NOT ON MY WATCH!!

“The refusal to take sides on great moral issues is itself a decision. It is a silent acquiescence to evil. The Tragedy of our time is that those who still believe in honesty lack fire and conviction, while those who believe in dishonesty are full of passionate conviction.”

Jesus did not prescribe this silent acquiescence to evil as a way to avoid division. We are not to kowtow to any “chilling effect” from the Mob. Instead, we must be willing to boldly speak the truth with love, in spite of the backlash that is sure to come:

Brother will hand over brother to death,
and the father his child;
children will rise up against parents and have them put to death.
You will be hated by all because of my name,
but whoever endures to the end will be saved (Matthew 10:21-22).

There it is: “… but whoever endures to the end will be saved.” In the present climate, those who oppose the Holy Spirit are being rewarded (prestige, advancement, wealth, power, etc.), while those who stand with Christ are being persecuted (ostracized, demoted, job loss, shamed, etc.)

So, I need to ask myself: What if I got hit by a car today? So, now, I am standing before the Judgment Throne of God. Will I be eternally condemned for being divisive in speaking truth that might offend those who oppose the truth? Or, will I be saved because I endured, in fortitude, to not be afraid to thwart the advancement of evil, in our times, by standing with Christ, and His truth, come what may?

Where do you stand? 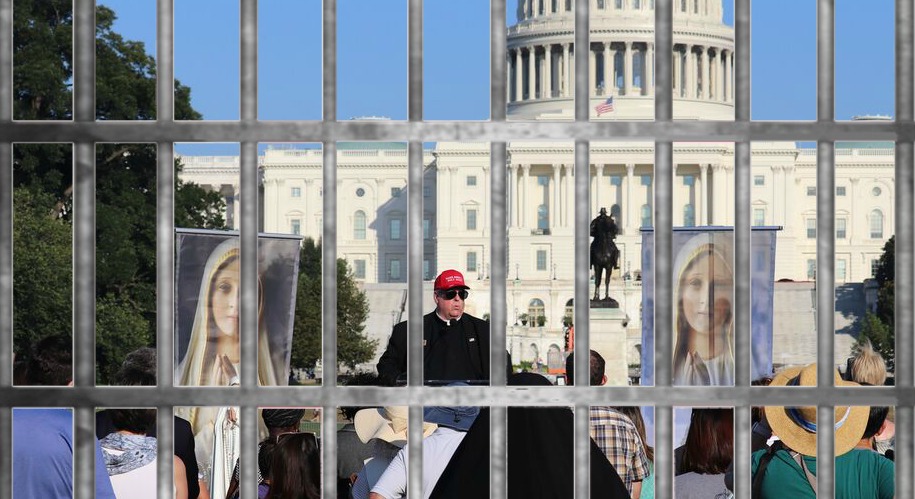