We Cannot Avoid the Ugly War of Politics

WE CANNOT AVOID THE UGLY WAR OF POLITICS

Politics is dirty and, oftentimes, immoral. I don’t like politics.

But, I am a warrior. I don’t have it in me to refuse to “get in the fight” simply because war is ugly.

We live in a two party system. That’s a simple reality. Having first engaged in every form of spiritual warfare, we must join the fight in “this system.”

Simply pointing a spotlight on oneself by proclaiming you’re not in agreement with either “ugly” party (I always see this as self-promoting) is nothing short of “draft dodging.” We must decide which party – which team – is doing the most to advance “The Kingdom of God.” Or, even, beware of which Party is working the hardest to destroy “The Kingdom of God.”

So, this is not about getting behind a “person” so much as it is getting on the right “team” … the team that most values what God values. If the wrong team gets in power, they advance their anti-God agenda at a shockingly accelerated rate.

LIFE: In our times, that means, primarily, defenseless pre-born babies and those nearing the end of life.

One team is for life, another is not.

LIBERTY: People should be free to strive to be the best version of themselves. While there are challenges we must face that make us better for having faced them, the rules should be fair for all.

PURSUIT OF HAPPINESS: God wants us happy…. FULL STOP! This isn’t about moving from the temporary high of one source of immediate gratification to another. It’s about the deepest form of peace and happiness that comes from living in all meaning and purpose; by discovering our lives are meant for others and for “getting in the game” to make this world a better place.

One team is pointing to Godly virtue and morals, and the way of excelling. Another Party is relentlessly promoting the false gods of sexual hedonism and radical individualism (“Do what thou wilt shall be the whole of the Law” from the Satanic Bible).

This is why I believe we cannot avoid the ugly war of politics. 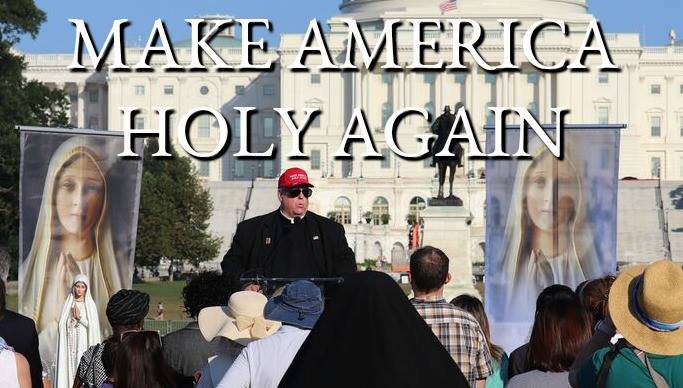